I entered this race because I was searching the Internet for races to enter and this popped up, it appealed to me because it said it was mainly flat along the river except one up hill and it was close to home. It is a lapped race; each lap is 3.14 miles as in the mathematical Pi. You can do anything between 1 – 13 miles and you choose as you’re going around. I was aiming for three but did two because of the weather.

The morning didn’t start too good, raining hard. I got there about 1 hour before the start and thought I might be in the wrong place, I saw some people in the middle of the field and people struggling to put a gazebo and start/finish arch up, which they gave up, it was quite windy. We got our numbers in the end and was directed to the middle of the field.

The race started by going around the park on tarmac paths then onto trail paths up to the back of, I think St Martha’s Chapel, then down towards the river, along the river for a while then over a lock, which I remember from a Sunday run.  We carried on running up the other side of the river, getting to a very sandy zig zag hill that seemed to go on for ever (horrible) but up the top there was a nice downhill afterwards, then through a field and a copse back to the start and then started the second lap.

There were only about 50 people turned up to race, so by the time I started the 2nd lap it did feel as if I was running by myself as the runners spread out. It was lovely on my 2nd lap to see some very welcome friendly faces, it made my morning.

I would definitely do this again preferably with BVR company that would be nice. I was told they do a Christmas run called The Mince Pi. 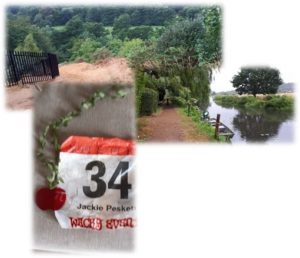