The weather in Aldershot had just turned decidedly wintery when 19 intrepid BVR ladies (plus The Campbell family support crew and official race course photographers :-)) set off to the Costas.

We’ve all watched the comedy series, we know the reputation that Benidorm has  (there was talk of a mobility scooter tour at one point!) but l think we all would agree that we have returned Benidorm converts now!

The trip organised by Mary Thane through a tour group called Running Crazy who cannot be faulted; Malcolm thought of everything we were looked after extremely well, from the initial communications through to the post race  after party!

Race morning had us up bright and early for breakfast which the hotel kindly brought forward for the runners.  Running Crazy was host to quite a few runners some of whom were Benidorm regulars.

We gathered for photos and last-minute toilet visits and then walked the 5 mins to race start.  Conditions were good little chilly few spots of rain but the sun was making its way out.

After the final few selfies the race started promptly at 10.  It’s a flat(ish) road race so had good potential for PBs.  We all spread out and found our rhythm.  Locals were out supporting, there were a few kamikaze mobility scooters dodging the runners as we went around the course.

Out and back along a main road which was closed to traffic, down along the sea front where the sun made a strong appearance and then a long gradual climb which did seem to go on forever.  However as this was another out and back there was opportunity to see the other ladies and give a shout and wave.  Of course what goes up also comes down!

It was a 2018 PB for me which l was very pleased with, and special mention to our lovely Kellie Archer who got her sub 60 which was very well deserved.

Post race drinks and fruit were available along with a huge shopping bag with a medal.

Running Crazy again had a meeting point for all the group for a beer or cava and congratulations.

The icing on the cake was then getting called to the podium for prize giving – we’d only gone and won a group prize and trophy.  The prize soon became our beloved mascot and was brought back to the UK by Shanie Masson!   Harry the Ham will be making an appearance at club very soon!!!

It was a great trip, well organised, great value for money and great fun, many many thanks to Mary for organising us and liaising with the Running Crazy folks.   I could say much much more about the weekend but well “What happens in Benidorm, Stays in Benidorm!!!!!” 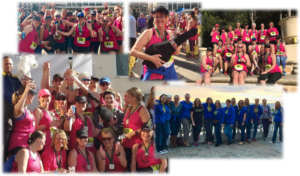