So … waking up to blue skies and the sun already shining it looked like it was going to be a glorious summers day … so what better to do … lets go to a not so empty field just outside Fleet ….

The first thing that strikes you about this place is that you are two minutes from the M3 and all the busiest that brings but yet you feel like you are in the middle of a farmers field away from all of that.

So there were already gazebo’s set up a plenty and as the morning hours passed more gazebo’s were erected …. Oh and that was just for the BVR camp! Looks impressive … must be time for a photo ….

Warm up done and at 10.25 we were called to the start … so those setting off first got behind the starting line and the rest of us … that’s the rest of our six teams … and support crew … all went to cheer them on their way so with Paula Fudge being given the microphone they were off .. and off they went … fast!

So the course, unsurprisingly was mostly trail. The starting area sent you on a very slight incline and then right along some bumps across a field, then down a country track. This is all rather pleasant … then came another slight incline … no this isn’t too bad … keep on pushing along … and then through the woods … what is this? Am I going backwards … no still going forward that’s okay … oh and there’s the top … phew … ooh, followed by another hill … ahh that’s okay, this ones not too steep and at the top again and down a nice path. Oh, and there’s a nice marshal cheering me on and turn the corner … ouch … this would be the hill everyone was talking about at the start (and I’m at the bottom looking up …. a long way) … plod plod plod and there’s the top. Phew! Now for a bit of sand and some nice long flat runs through the woods … haven’t I been here before (you come to the same point from two different directions) … and then comes the down hill … just don’t fall flat on my face… this is a very long downhill back to the race village and round the corner and there’s the finish line. Right I’ve crossed the finish line … oh my god … who put the exchange area so far away? Right I’m there! …. and breathe!

So as I mentioned earlier …. we managed to enter six teams … everyone gave their all on every run and there were some great times achieved on something that was not exactly a flat course. However, would I describe it as hilly? Well, that brought about some debate so I think I will leave that for the people listed below to comment on. Besides that the atmosphere was fantastic and there was a real sense of team spirit that quite frankly I am not talented enough to find the words to describe … for everyone there … thank you for creating this wonderful atmosphere.

Throughout the four hours and beyond the cheering of BVR for their running teams could be heard and it was a sight to behold to see everyone crowded after the finish line to cheer those still giving their all out on the course home for the final lap.

The event itself was a little bigger than we expected with 115 teams taking part (28 male teams, 60 mixed teams, 27 female teams). So how did our teams fair? 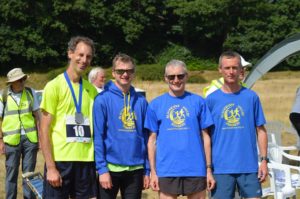 Our fastest team – the BVR Black Group, Simon, Scott, Steve and Alex went out fast … and after the first few laps were in second, at one stage they dropped to fourth but somehow managed to pull that back with the superhuman efforts and finished back in second place overall and second male team. They completed 16 laps. Well done guys … I could see how much effort went into that and it was great to hear again the BVR cheers when we got to see you collect your prizes. How was the beer?

And of course …. no amazing achievement can pass without the obligatory celebration! So, then came the prosecco and the beer and the ……

Thank you to those that brought it with you … it was a lovely way to finish.

Well done all … it was a great day … and a great team to be part of.

So what’s next … well our next BVR Points Championship event with be the Farnham Half Marathon, Marathon & Family Walk. More information can be found at http://www.farnhampilgrim.org.uk/.

If you don’t fancy that distance why not join us at the Alice Holt Races the following weekend on the 17th. There is a 10K, 5K and a 3K or 1K for the smaller runners in our families. More information can be found at http://www.farnham-runners.org.uk/racediary/aliceholt10k.htm

So come and join us for a run in September on the 11th September.

This site uses Akismet to reduce spam. Learn how your comment data is processed.