PACING AT THE RUSHMOOR 10K

In the weeks leading up to the Rushmoor 10K someone had suggested about pacing at the event and I took on the task of finding volunteers to pace different times. Not having felt very confident about managing a 10K PB myself I decided the next best thing would be to help others achieve a PB and volunteered myself to pace 65 minutes. Others volunteered to pace at different times and Veronique very kindly put together some pacing bibs for us so it was clear what number we were pacing at!

Having been  myself paced to PBs over a couple of 10Ks I knew the job of pacing was not just to ensure running at the target time but also knowing how to give verbal encouragement to those you are pacing. This can actually be really tricky! I found myself telling the people I was pacing to relax when in fact they probably felt anything but relaxed! However I helped at least one person to a Rushmoor 10K PB and helped others to keep going and in the end my gun time was just under 65 minutes so I was rather pleased with a good job done.

The other pacers did a fantastic job, Ian Carley (40 mins), Peter Duerden (45 mins), Rob Ostler (50 mins), Jason Hastings (55 mins), Matt Lee (60 mins), Mary Thane and Vanessa Cracknell (70 mins) and Cyra Parke (75 mins) all helped people to PBs and in fact that PB bell rang hundreds of times! A special mention to Peter who was a last-minute replacement for the 45-minute pacer and who when asked to pace with very little notice gladly stepped up to the challenge. The feedback I got from the pacers is that they all enjoyed doing it and I would really encourage anyone to think about giving pacing a go as it is thoroughly rewarding to help others achieve their target times and very enjoyable. I would definitely want to have a go at pacing again at Rushmoor next year. Hopefully next year the weather will be kinder! 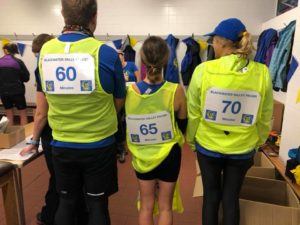 An early start on Sunday as my first job was to check that everything that needed opening had been opened by someone from the Garrison Sports Centre – I’d given them a list on Friday. They’d initially told me that they only got to work around 7am and couldn’t open up until 7.30, but would see what they could do. I arrived at 7.10am and found everything we needed was open.

It was pouring with rain so registration would have to be in the Rugby Stadium pavilion. I couldn’t remember the layout but went inside and found that there were 2 big changing rooms, one with a table in which seemed most suitable for registration. But unclear if these 2 rooms would be sufficient for registration, t-shirts, changing, and baggage for 1000 runners. Decided to leave this for DaveP and the registration team to sort out.

Other volunteers were now arriving at the stadium. I handed out 3 radios that I’d borrowed from parkrun, one for DaveP and two for the car park marshals. There would be one car park marshal in the main Rushmoor parkrun car park, and another back at the Fox Lines car park. The parkrun marshal would warn the Fox Lines marshal over the radio if the Rushmoor parkrun car park filled up, so cars could be diverted into Fox Lines car park (or even further away) to avoid traffic chaos. I have no idea what actually happened, but I didn’t hear anything on my radio. Possibly there was no problem because less people turned up in the torrential rain.

My next job was to make sure the 10k course on the polo fields got marked out. I’d previously designed the route on www.mapmyrun.co.uk, and the 1km marker had to be on the back straight opposite the “Aldershot Rugby Stadium” sign.  On Tuesday I’d walked the part of the route over the polo field, looking for sight lines to ensure that we’d mark it out correctly. On Friday I’d put some sawdust and red flour down at key points for DaveP to find on the Saturday, when his team marked out the 2km/10km race divider using the “blue rope”.

I’d borrowed 30 white plastic sticks from parkrun to mark the 10k course, and also had 60+ bamboo sticks with tape attached that we use for the Farnham MABAC to mark the route across large grassy areas. I lugged all this onto the polo field and was just starting to mark the course when the rest of the marking out team arrived. The rain had now eased off a bit but all the sticks went into the wet ground very easily.

By 8.30am we’d done the route but not finished off the start funnel. No sign of the guy from FullOnSport who should be laying down the starting mat. I radioed DaveP but couldn’t get through to him, so sent someone over the road to find out what was happening. The FullOnSport guy eventually appeared at which time we discovered that the start mats would be 4m wide although I’d asked for 5m. So all the white plastic sticks for the start funnel had to be adjusted. It was now 9.45am, runners were assembling at the start, and DaveP appeared and asked me where the PA system for the field was. Still in the boot of my car.  I had to run back to the stadium and get it. Back at 9.55am.

I now noticed that the start of the 2km route, which was marked out by the Nepalis, wasn’t well signed. No signs at all! I had 2 sticks & arrows left so banged them in to indicate that runners should go straight ahead (to the left of the blue rope) at the start. I then ran to the first corner where there was no sign turning the runners sharp right. After the gun went, the 2km runners came towards me then I directed the first few to go right. All the rest followed. I then ran across the field to the corner by the canal as I wanted to see if there was any congestion when the 10k runners funnelled onto it – there wasn’t.

After all the 10k runners had left the polo fields, I began the huge task of clearing the field of equipment. The rain was torrential. A couple of us cleared about half the field then more people came to help. I told them to leave the rope around the football pitch as it wasn’t ours. The next time I looked, more helpers had arrived and had cleared the rope around the football pitch – we left their rope and poles by a goal post.

Finally got back to the stadium to have something to eat and drink, to find that the 10k finish line had been somewhat chaotic (finish arch fell down, bad/missing times by waterlogged equipment), but that’s another story. The guy from Rushmoor Borough Council complained to me that there was no one marshalling the traffic trying to leave the parkrun car park, but I didn’t see what I could do about that. Apparently all the 10k runners had ignored the taped channel that we set up on Saturday by the barracks entrance, and instead had stepped over the red/white tape barrier we’d put up and were running down the road towards the Garrison Sports Centre. Not on the pavement despite 3 big yellow signs telling them to keep to the pavement. This did not help the traffic situation as cars were trying to leave but were being held up by runners. We need a BVR marshal here next year.

I wanted to make sure that all the borrowed parkrun equipment got back to them. I had a hard time tracking down the radios; two were left lying by the t-shirts and one was buried in DaveP’s van. I went to the Garrison Sports Centre and got someone to open up the parkrun container for me, so I could put the white plastic sticks straight back in it rather than take them home in my car. The radios and PA I delivered back to a parkrun organiser the next day.

Finally got back home around 3.30pm and laid a lot of yellow arrows out in my garage to dry, but some were very waterlogged and I suspect we’ll have to buy a lot of new ones for our next events.

There were 1098 10km entries this year. 884 turned up/finished the race, of which I think 98 were BVR. With better weather the marshalling would be a lot easier, but another 100+ runners (and their cars) might turn up which could create other problems. Next up it’s the Woodland Woggle 10k on 12th May. I’ve never run this event as I’ve always been too busy helping out on the day. Anyone want to take on my jobs so I can have a go?