Donna had booked this as part of her 12 half in 12 months and I somehow decided to join her on Friday despite the 27C forecasted!!

This was laid on by a company called runthrough. They also do Thorpe Park half and many other events in London / Surrey.

A very straight forward trip up the A3, it was incredibly easy to get to and park. We arrived quite early but the registration/ bag drop all seemed really well organised and were manned by a really young energetic team.

It quickly became clear that it would be extremely hot with a lot of runners waiting in the shade before the start.

They started the race in small waves 3 minutes apart and with roughly 750 runners it was a good field without being too crowded. There were a few bottlenecks in the first mile but overall it was easy enough to move. 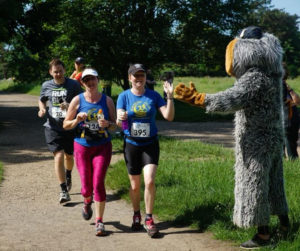 The course is 2 laps with a hill in the first mile and therefore again at 6.5 mile. The rest of the course was really flat and there was a great shaded downhill toward the end of the lap/finish.

I think both Donna and I found the first lap really tough mostly as we knew we had to do it all over again and it took us a little while to adapt to the heat. It was fairly clear that the heat was hitting everyone really hard, we all seem to be struggling to up the pace!

There were 4 water stops, not very strategically placed and we were glad we were carrying a bottle at the start as the first one was a good 4 miles in.

The wombles were out on the course high fiving the runners and overall the course was really pretty and shaded but very much a trail one (with mud/roots the lots!).

They run the same event several times a year and for £28 (£26 for club members) it seems quite good value with a nice fun medal, a technical t-shirt and a few freebies at the end.

Would love to do it again on a cooler day but I guess that might also come with a lot more mud!!